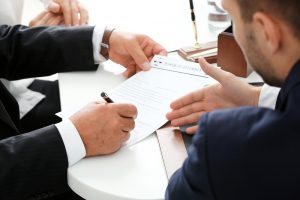 Service of process is the procedure of giving a person or party appropriate notice of legal action. It can be a subpoena, a call to be a witness, or notice of a lawsuit. Process servers carry out service of process, often hand-delivering notices to ensure that there is no question of whether or not a party received it. Service of process is a part of the American Constitutional right to due process, which ensures fair treatment in the judicial system. Due process lays out what American citizens are entitled to when it comes to the legal system, including being notified before being called to court.

There are certain rules that apply to process servers in the United States. They can find information about a person and locate them using legal tactics, but they can’t conduct surveillance. They deliver papers, but they can’t leave them in a mailbox, deliver under false pretenses, or trespass to deliver them.

However, when it comes to cases and parties in different countries, things get a little more complicated. Since many people can’t afford or don’t want to send a process server abroad to deliver a notice, there are different channels and ways process servers must go through.

In the past, a court in the country where the proceedings were initiated would issue a letter to a court in another country, often requiring that they go through consulates and diplomats to get it done. In 1965, the Hague Service Convention in the Netherlands changed to rules for international courts. The Hague allowed for service of process of documents to pass from one country to another without the use of a consular or diplomat.

This made it much easier for parties to contact each other in different countries. It also opened up new channels of delivery. While process servers can hand deliver documents abroad, they can also be sent through postal channels or by a private courier service. Notices can also be sent through the Central Authority, which is a free service but can taken up to six months.

Why You Need to Hire Ace Process Service to Do an Assets Search for You
January 14, 2021

Don’t Let the Busy Holiday Season Prevent You from Collecting Past Debt
December 5, 2020

Why a Credit Report Search May Be Done by Ace Process Service
October 26, 2020

How Ace Process Service Stands Out with the Services We Provide
October 5, 2020